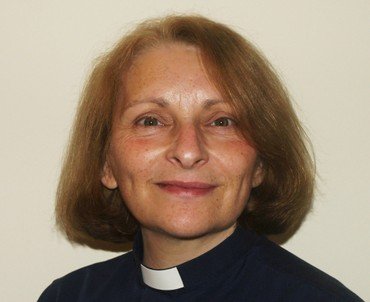 Hello, my name is Revd Sue Webster and I am delighted and privileged to become HTM’s new Team Vicar from September 1st. For the previous five years I was House for Duty priest within the Walbury Beacon Benefice, not so far away of course!  I am excited to be moving into Hermitage Rectory during the late summer and look forward to getting lost (and occasionally finding my way!) around all the beautiful village communities in the HTC Benefice.

Originally, I came from another beautiful part of the country – Malvern, in Worcestershire. After school I undertook nurse training in London. Later I studied for a degree in both Psychology and Sociology and then qualified as a teacher and taught Psychology to nursing undergraduates. I was selected for ordination training in the early nineties and was ordained priest in 1995. After this I served in a variety of parishes, in the city of Worcester and in the countryside around Bredon Hill, near Pershore – still in Worcestershire.

I met my husband Robin at school and we’ve been married for (nearly) 40 years – where has the time gone? Robin works for the Diocese of Oxford as a Schools Advisor for the Diocesan Board for Education and is also Curate at St. Lawrence’s Church, Hungerford. We have two adult children: Carly is Head Librarian at the University of the Arts in Norwich. She is married to Christopher and they have two sons, Jim who is 4 and Cameron who is nearly 3. After his work as a Computer Games Designer took him to St. Petersburg 3 years ago, our son Ben met and married Anastasia. They have just welcomed their first child, a daughter Kira, into the world.

I love rock music, singing and dancing, science fiction films and Jane Austen novels. I would like to be a good cook and gardener but I’m not and I try my hand at embroidery from time to time with mixed results!

I look forward to meeting you in the weeks and months to come and to sharing the Journey with you all.